skip to main | skip to sidebar

Whenever the weather gets warm, I think about ghosts in my neighborhood.  Most of the buildings on my block in Manhattan are old, dating back to the 1880s and early 20th century.  These buildings must have ghosts, but I have never seen them or sensed them.  Do they even exist?  Are they here in this neighborhood?

There have been tragedies on West 74th Street.  A teenager jumped to his death from a high rise building in the 1930s.  Fortunes came and went and those who were defeated ended their lives here.  In my own building, some sad characters started on their final decades in the 1970s and one of those last unfortunates died earlier this year.  And yet there are no spirits walking the hall, nothing vaporous, no sounds, nothing at night.  Where are they?

It would be worth it to take the elevator up to the 9th floor late at night to see if the ghost of the woman who died recently is screaming (silently) down the hall in her sad state.  But do I really want to see her?  And what about that hapless sad man who is still staying in her apartment, squatting there and being abused by another man with a spray-on toupee?  Can the hapless man be helped?  And how long will it take to rid that apartment of the filth, detritus, and broken tiny pieces of these sad lives?

I expect that any ghost would be happier than the people still alive in that apartment on the 9th floor.

I was watching a couple of back episodes in preparation for tonight's premiere of the new season of Being Human on BBC America. Initially, the show was intriguing in only a minor way, but as I watched it again, I was overcome with the deep and lyrical sense of longing that permeates it. Every character is waiting for something to happen.

I took a walk early this afternoon. On the way out, I looked down the corridor of my apartment building, so similar to Annie's trip to Purgatory -- old walls, tiled floors, dim lights, wrinkled voices behind sad doors. The March wind picked up and tossed poplar seeds along the traffic islands. Children and parents grabbed at hats that almost blew off their heads. Shoppers from Trader Joe's clutched the handles of their paper shopping bags relentlessly. March wind blowing in February. Strange brew. Lights came on as the day grew darker.

There is a feeling that something big is about to happen. For a flash, the hallway of my building seemed narrow, darker, ill-lit. The voices were silent for a moment. Then the elevator door opened and a tall blonde girl got out. She pounded on the door of an apartment, waited, pounded again. I could smell cooking smoke. I went down to the mailboxes and when I returned she stood there, still.

Spectral Street. Episode One.
Since the heat of last summer and the summer before, the population of the street has grown smaller and dimmer. The courtyard that used to be populated by ghosts of all kinds, all colors and shapes and fabrics and sizes has become emptier day by day. Some say there is a prison beneath the stones where ghosts of old dancers live among tunes old fashioned and out of date. In the high heat of summer, the flowers fade, like the marigold the king held fast in his hand. Why, on this urban street, would there be a king? Why marigolds except to keep the bad bugs away, the bugs that eat the flowers and kill the peonies? 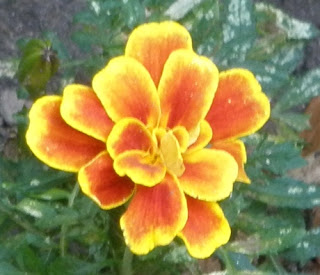 But the king still had to rule this strange and diminishing kingdom and so he called upon his advisors one day in winter. "What shall we do this year? It has been too cold to walk out in the park and too warm for snow. The birds stopped singing in the fall, though the stone swallows with the green eyes are still there on the terrace. My kingdom is shrinking, and I don't know what to do."

In the kingdom of ghosts, there are no ghosts. They talk and walk and fly and yet cannot sit on the park benches and tie their shoelaces. They cannot pick up a newspaper left on a subway seat and read the baseball scores on this strangely warm day. Everything is changing here; everything is old. How would the king rule in a kingdom that shrank day by day. And yet he had to remain the king, for without even this little stability, the world would fly apart at the center and all would soon be lost, bathed in a scarlet light that was too, too hot to last for very long. Only the wind that ran through the courtyard every now and then kept the earth on its axis here on spectral street.
Posted by M.A. Dering at 9:57 PM No comments:

M.A. Dering
I have lived in Manhattan for 30 years; I work as a writer and am a licensed NYC sightseeing guide, both of which give me the opportunity to research and write about the city I love.