skip to main | skip to sidebar

The Moon in the Windows

Three-quarter moon in the tall sky.  Streets full of yellow leaves and a left-over ghost with red eyes in the corner of a brownstone.  Marathon zombies everywhere.  Windows full of light, some cracked at the bottom to let out the steam heat and let in the autumn night.  A laugh, music, someone practicing the violin inside the French doors.

More and more people fill the sidewalks, and the line outside the bakery is getting longer.  Dinner delayed.  I watched a car plow down the street, headlights bouncing off a street-level window, replaced seconds later by moonlight.  I walked past silhouettes of cats and someone at a kitchen sink.  How can all of them fit into that tiny room with the loft bed and the clutter of books? 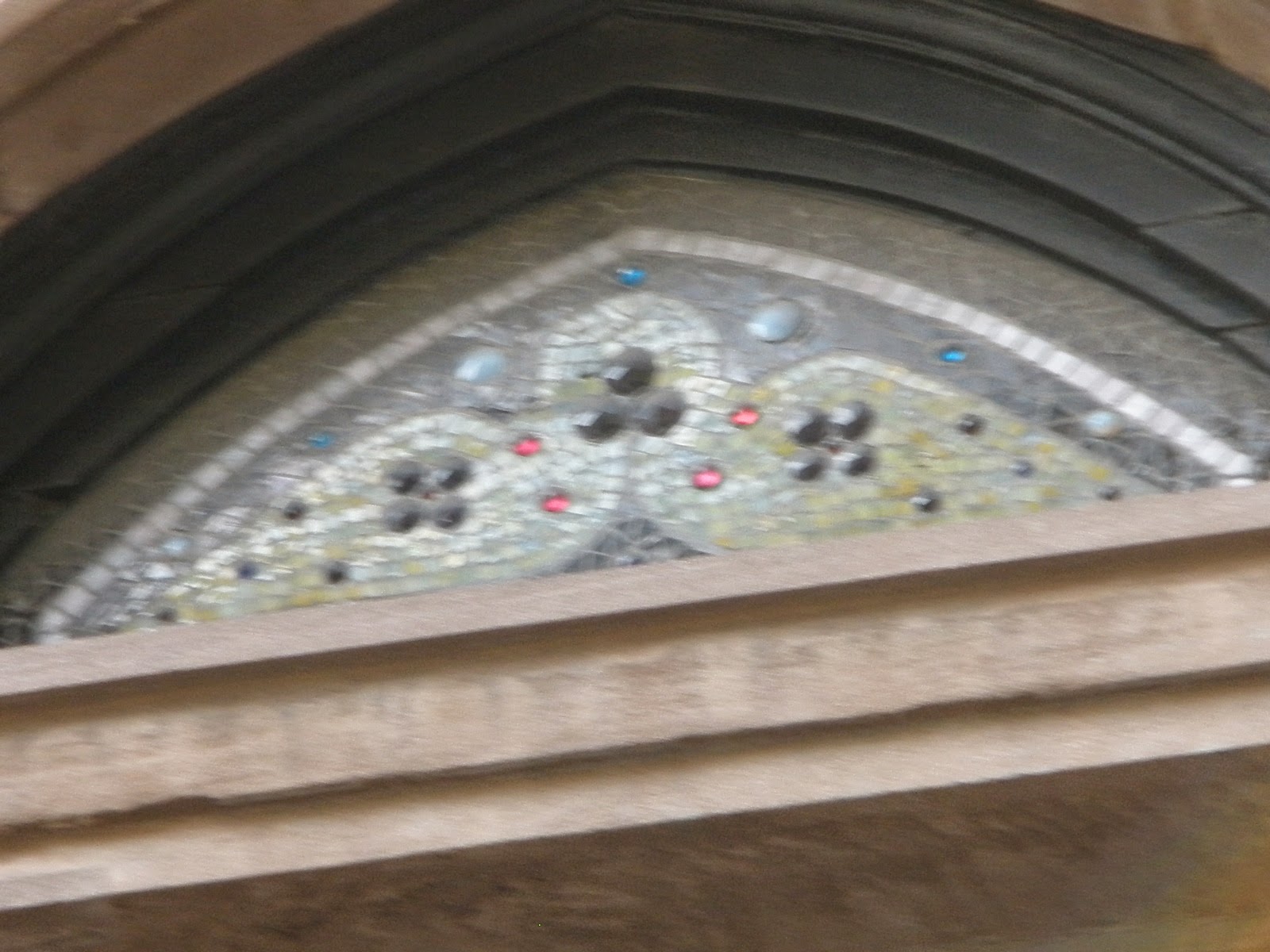 The hazy jewels above the fanlight never come into focus.  Day and night make no difference; they suck up the light but don't reflect it.  Everything is spinning on toward midnight as the woman at the kitchen sink washes her dishes and feeds the cats.

Tomorrow is Monday, back to work day.  What is next?

The firecrackers from the Marathon pre-party stopped.  It's almost 7:30 on a night when anything is possible and I can be whatever I want.  Every kid makes me laugh, especially the tiny little boys dressed as Godzilla.  Parents dressed as Tweedle-Dee and Tweedle-Dum roll a two-foot-tall Alice between them.

On West 69th Street, the brownstones get fancier and spookier each year; tonight they've added smoke and the sound track from Ghostbusters.  Dogs yap at each other and little children start crying because they're tired and hungry and clamoring for more candy.

Many windows are lighted.  I see shadows of people moving in their dining rooms, making dinner or sitting down to eat with friends.  Someone is deep in a back kitchen with only one light on; the front rooms are dark.  Is she hiding from trick and treaters or just conserving electricity.  What is she having for dinner -- maybe eggs and toast?  Do I smell coffee?  How many people have lived in that apartment before her, and what are they doing tonight, this Halloween of 2014?

Old buildings line these streets and breathe in and out the air of decades ago.  There is little room for error.  Ghosts visit with each other before daylight, and then must go away until next year when their homes are open again.  The lights will be turned on, and old friends will drift through the air into the trees and nod and laugh and say hello.  Some will weep from loneliness, but not for long.  On this night, anything is possible.

I turn to go home.  Ghostbusters is still thumping and more people have arrived, laughing and eating bite-sized pieces of Twix and KitKat.  There is no rain, but the wispy clouds are turning heavy.  Yellow leaves finally drift down to the street and the smallest children have gone to bed.  Only adults and teenagers stroll along, waiting for something to happen.  The ghosts are ready, too, for what might become the night of their lives.


Bin 37 does not have a ghost.  When I last went to the National Archives, bin #40 was taken.  So I put my things into the bin directly to its left, locked the door, and put the key into my pocket with my ID card, a pencil, and a folded-up piece of paper.

Nothing rustled.  Nothing chirped, glowed, flashed, made music out of static, or quivered in my bin.   The researcher using bin #40 was single-mindedly trolling through microfilm; the ghost probably got bored and fell asleep.

I ordered a document from off-site storage.  I would have to wait a week to retrieve it.  However, the Archives kindly emailed my document to me.  If bins 40 and 37 are taken on my next trip, perhaps the senior ghosts will convene in my bin after an intern fetches coffee.


The Alexander Hamilton Custom House is haunted.  In the National Museum of the American Indian, which occupies the bottom two floors, Yupik masks trembled on the walls where they hung.  The first-floor women's room was full of singing, whooshing noises.  And now I've learned that the third floor, the National Archives, has its own ghost.

I put my belongings into bin #40 when I visited last week and locked the door.  I put the key into my pocket and carried my papers and pencil over to the microfilm reader.  I didn't stay long that morning.  On my way back to get my belongings, I heard a loud crackling sound, like the wind rattling through a deserted can on the street.

There were three people in the Archives:  the desk attendant, a volunteer, and I.  And there was a spirit in bin #40 desperate to communicate.  It turned on my cell phone -- set to "Outside" -- from inside the bin.

I opened the bin, took out my shoulder bag and checked inside for the phone.  There it was, glowing at me, ready to go.  Laughing.  What did you want to say, spirit?

It hasn't happened since.  But I am going back on Thursday.
Posted by M.A. Dering at 7:10 PM No comments:

It's market day today.  The ghosts who live behind these doors 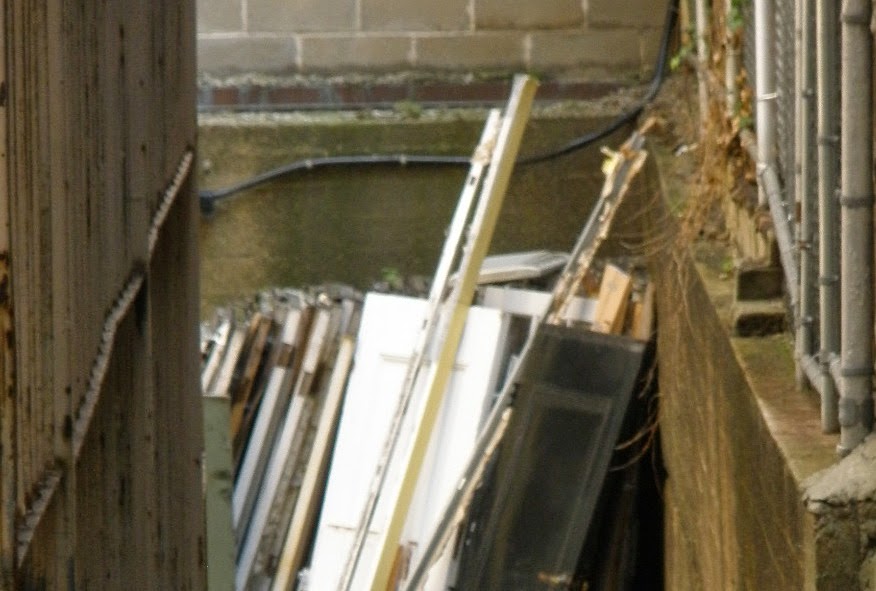 returned before noon, stocked up with provisions for autumn. 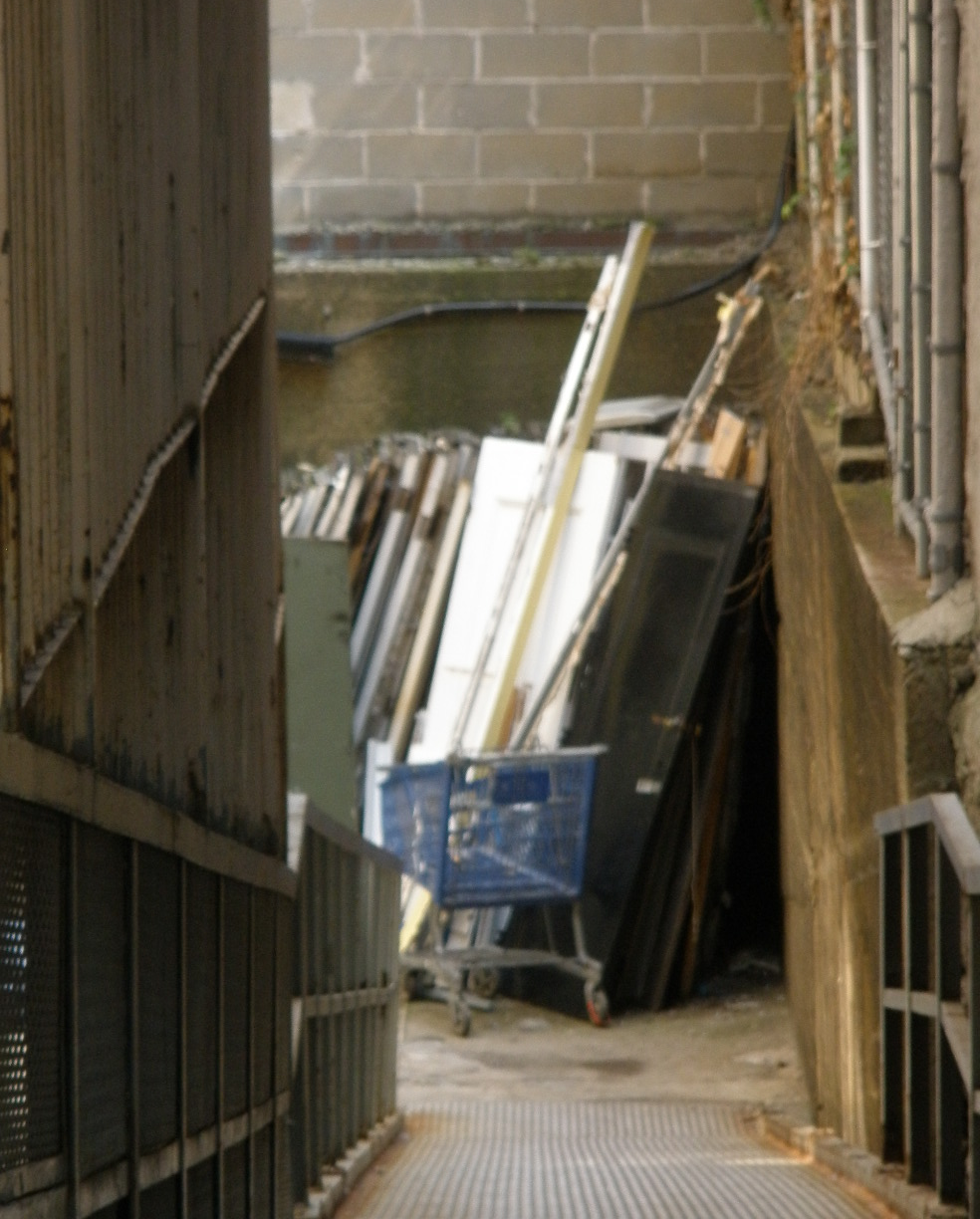 I imagine the outer gates will be closed soon, as their parties are invitation-only.
Posted by M.A. Dering at 9:21 AM No comments:

I wanted to photograph the ghost doors but the gates that keep them captive were closed today.  I will try again the next time the gates are open on recycling day.  What happens if a ghost is thrown out by mistake?  Does it get recycled, too?
Posted by M.A. Dering at 3:57 PM No comments:

"A ghost a day" is trucking along.  This cold afternoon, I found a graveyard of century-old doors, stacked up in the courtyard.  The doors were splintered, paint-stripped, white, brown, speckled, mottled.  The crystal doorknobs were stripped.

When they were young, the doors covered rooms full of stories but now they stand outside, memorials to workers who came and went, got married, moved, had children, and died, here in Harsenville, in this building, 120 units, generations over and over again, full of hope with New York City in their eyes.

The sounds have walls; the walls had doors but now the music evaporates into the early Spring night.  The bassoon player and the soprano are gone, replaced by a man who coughs his guts out every morning and a couple who scream at each other, go quiet and scream again.  The windows are old and porous.  The ceilings ping the sound back to the walls.

Every morning Mr. B. trudges up seven flights of stairs singing a song in his robust, bass voice.  You can set your clock by him.  He is not a ghost and his song does not linger.  But somewhere, in the depth of the building, are snatches of songs sung by boys who died too early of AIDS in the time when no drugs could prolong life.  They laughed and their voices hang in the air around the laundry room and their jokes stick to the walls like old glue.

The hall in the basement is long and dark and winding.  One door goes to the boiler room, one to the workroom, one to another corridor that I have never been down.  Silent footsteps go down the long hallway, past a door that guards the room that for 30 years I have never seen.  Quiet, quiet, all is quiet in this land of discovery without doors.

A Ghost a Day

Remember those square, stand-up "Word a Day" calendars?  I'm going to start a "Ghost a Day" calendar.  I'll stack up 365 ghosts, one on top of the other since they don't take up much space.  Then, as each day goes by, I'll peel one off.  The others will be dying for their turn.

Over the past year, I read installments of my short story, "Life Magazine Turns Ten," at Open Mic Nights at the New-York Society Library.  I was looking at the menu that inspired the story, thinking about F.M. Howarth.  I wish I could figure out where he went when he came to Manhattan to drop off his work or to visit with publishers.  But I get no clues from the menu (except that he went to Sardi's once for the "Life" dinner).  I get no vibe, no jiggly waves.  It was so long ago; doesn't he want anyone to remember him?

That's the way with ghosts -- they hang around the high corners of the living room pretending to be anonymous. Then they get nervous and anxious because no one is paying attention.  They move around and stir the air, puff in my ear, play a radio in a distant apartment that the painters left yesterday.

Ever notice when you don't have cobwebs in those undusted corners?  And you thought it was your Swiffering.

You won't see their tracks through the dust on your dresser.  Ghosts are far too light and clever for that.  Just check the corners.  I have to go look for F.M.
Posted by M.A. Dering at 3:22 PM No comments:

M.A. Dering
I have lived in Manhattan for 30 years; I work as a writer and am a licensed NYC sightseeing guide, both of which give me the opportunity to research and write about the city I love.